A comprehensive review can be found here.

"I have never heard a component that makes a musical connection so effortlessly, readily and consistently." - Enjoy the Music review.

"I'm going to get this out of the way right now. I fell in love with these things. Of course, like everything they have faults, and I'll try my utmost to fairly detail them. But, at least to me, the faults they have end up being of little consequence as the soul of this machine is completely musical. And a brief reminder to all those who have turned off their own soul in the search for a perfect high-end "audio" experience, being swept away by the music is a good thing.

Second matter, in many ways this is the most difficult review I've written. Of course, the first reason is the deep emotional connection I felt, almost from the start the review, and the need to remain objective (doesn't this seem strange to you - we want, in fact we need music to move us and so when we find a piece of gear that allows that deep connection we strive to retain objectivity in describing its effect?). The second reason is that the Neo-Classic is a uniquely flexible amp and under its various conditions of operation has a wide range of sound and so posed formidable logistical problems. Just to be perverse let's start with the boring, logistical stuff and then get to the gory and glorious details of my bewitchment."

The wonderfully simple 300B directly heated triode is virtually Lee De Forest's very first evolutionary 3-element piece, comprising only filament, input grid and anode output. Brought to reliable perfection by Western Electric USA and later by Standard Telephones UK as the 4300B, the 300B was very much intended and widely used for telephony amplification. But audio enthusiasts of older times knew a good thing when they saw (heard!) it and the great love affair between the 300B and music began... and dwindled many years later as the American Western Electric 300B was taken out of production in the late 1980's making the genuine ones extremely valuable and, accordingly, very highly prized as collectors' pieces. With the Asian-driven passion and resultant revival of single ended topology the call for the 300B to be put back into production was too overwhelming for the Chinese factories to resist. The Russian and the re-start of USA manufacture of the genuine Western Electric original have further expanded the selection.

Basic thermionic simplicity... directly-heated triodes... it is a drug for some, a religion for others...

With its decidedly (and studiedly) 'retro' physical proportions- very deep front-to-back dimensions with a narrow side-to-side width, this layout closely follows concepts of a bygone era, where the well-conceived intention was to keep the power supply as far as possible from the hum and noise susceptible octal input tubes. The output tubes themselves require careful distancing from the mains transformer and, of course, require pure DC on their filaments. Again, reverence to past times begs the use of vacuum tube rectification with its very gentle voltage rise-time. But to bring the performance up to modern demands, Manley uses two rectifiers to enable the use of very substantial filter / reservoir capacitors... over 1300 microfarads in the B+ rail- much improved from the 4 or 8 microfarads utilised in the 1930's.

When several other manufacturers started selling single ended amps with 5 to 9 watts of power, Manley understood subjectively and objectively the good part of the story: the superb mid range, the delicate detail, the inherent simplicity. The bad news was that there were almost no speakers efficient enough to help form a dynamically viable system. The worst news was that either these single ended amps cost more than the condo and or they had specs that could only be read as a joke. As the triode fans increased, more efficient speakers became available and several fanatics began to dismiss push-pull as a bad thing to be avoided at all costs. Manley objected to such blanket generalities and stressed that the push-pull done right with truly phase-balanced transformers, quality parts throughout and well designed circuitry has proven to be a superb technique. Manley also enjoys single ended topology but only when it is done right, mostly because Manley expects flat frequency response and low distortion out of an amplifier. Manley knew that they could achieve this in a properly conceived single ended design. They chose to rise to the challenge of designing special circuitry that could be switched "on the fly" from 12 watts in parallel single ended to 25 watts in push-pull, which Manley believes is unique in the industry.

The output transformer (hand-wound in Manley's own factory) is of complex design employing inordinately high primary inductance to compensate for the mandatory magnetic "gap" required for the uni-direction current and voltage flow of the single ended output stage. Another factor in the single ended triode saga (currently enjoying a wide spread popularity) is demand for little (or sometimes zero) negative feedback. The people at Manley Labs believe in the judicious or sensible amount of feedback to refine and maximise performance. Their Neo-Classic SE/PP300B gives you the choice in precision switched 1 dB steps to go from zero dB's to 10 dB's of negative feedback. Even with zero negative feedback, this amp is cleaner and flatter than any single ended amp Manley knows of.
One interesting aspect of negative feedback is it gives a higher damping factor. Conventional wisdom would have Manley think that the higher the damping factor, the better. Manley's experience is that the optimum damping factor is not infinity and that it depends on the speaker, the room, and the taste of the listener. In other words, the optimum is variability, and this Manley provides. This amp satisfies Manley as long time amplifier builders, amazes the critics in several well known magazines and is bound to satisfy you with the ability to fit into your system and your expectations. But remember please the overall facts of power ratings versus loudspeaker sensitivity and room size when electing to venture into lower power amplifiers (less than 50 watts) and especially when contemplating single ended topology.

Max power ratings are 12 watts in SE mode and 25 watts in PP mode. But because of better bandwidth delivery and better driver "drive" into 300Bs these Neos sound louder and "seem" to be more powerful. They distort much less early when pushing the power envelope. The power supply sags-on-demand is at a much high point than before for more headroom. It is all beefier and heftier.

The heater (300B "cathode" which is directly heated triode design) now has 40dB less ripple. Neo design has more capacity in heater supply and lots of PI filtering! So the result is a quieter amplifier. Big time.

The Neo's chassis was redesigned to accommodate a much bigger power tranny. Huger VA. Next frame size up. Cooler running. Much more able to deliver-on-demand. Less PSU sag. Kick-ass. And now, finally quiet! There wasn't enough room on the old Retros for next frame size up to achieve a nice and quiet power transformer design. Now the Neo's chassis is big enough to have a big enough power transformer that is really silent and running on holiday.

Bias supply is now cleverly cross-coupled so that changing one tube's bias doesn't whack the other one out. This is very cool.

Manley even isolated the input B+ for more stable input B+ supply. Again, so when pushed, the whole amp doesn't drag everybody down with it.

Power switch at the IEC so all those nasty AC volts don't come up and infect the input stages.

Discarded the transformer-balanced XLR input. Because what's the point??? At gunpoint, Manley will make a balanced XLR transformer coupled input available "upon special request"... but you need to have a bigger gun than EveAnna does...

Now Neo has nice beautiful WBT binding posts that everybody loves. Still has impedance load switch as before.

And bottom line, in all the listening tests, this Neo is very much improved. Now with this six months of re-engineering of the Neo-Classic SE/PP 300Bs, "THD be-gone!!!!"

The Electro-Harmonix Russian 300B tubes are being shipped as standard. That's 300B-EH. 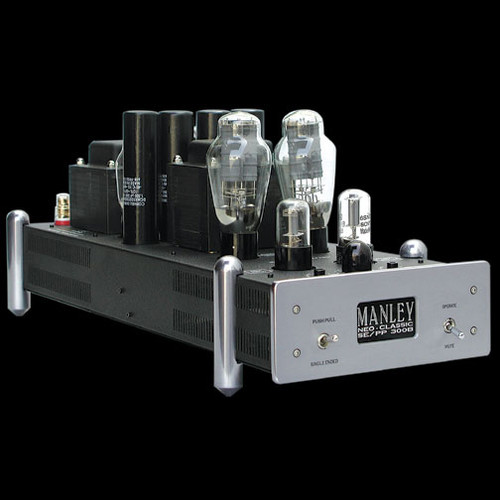