The Manley Steelhead, as it is an "upstream" device and has a very clever MC variable load auto tranny that Mitch Margolis (on-staff Manley hifi designer) designed and the Manley Magnetics department executed (which makes the MC stage so very clever).

It has two Moving Coil inputs with selectable impedance loads via a transformer/autoformer. It also has variable and selectable Moving Magnet input impedances. Very nifty is the variable capacitive loading switch on the front panel for all three of the MM & MC inputs, 0 to 1100 picofarads in 10 picofarad steps. Ten picofard steps! Wow! Now you can really dial this in for perfect cartridge matching with zero penalty. None of this switching detracts from the sound quality or adds any extra anything to the signal path, rest assured.

It's got 6 tubes. 2 x 6922 plus 4 x 7044 or 5687. It's got a big volume control. It can drive an amplifier directly if you want, if you don't "do" digital. And if you happen to have three turntables set up, Manley gives you 2 x MC and 1 x MM selectable inputs! It's got variable and fixed volume outputs. And all-tube really low Z tube buffered outputs. Like inherently 20 ohms plus the little 47 ohm resistor, so its real output impedance is only 67 ohms. No cathode follower output here like the other guys. Manley got your real low impedance all-tube outputs right here! It will drive anything and everything. Long cables, no problem.

It's got selectable gain 50, 55, 60, 65dB on a switch that even auto-mutes as you change it so no nasty bangs. Gain switch markings are referred to from the input of the 1st active electronics at 1 kHz to the fixed output @ 10k load, regardless of whether source is MM or XFMR stepped-up MC. It is not really practical to include MC step-up gain on the front panel markings due to the variable source impedances of the MC cartridges and the variable loading that the input XFMR will have on any given cartridge. All of this total MC gain variability should be confined to about 3 to 12 dB of range though. XFMR step-up gain plateaus as the load Z on a given MC cartridge is optimised...producing no voltage gain but in fact a bit more power gain... All this means you should set a load Z which sounds best with your particular MC cartridge and adjust gain to suit your system's operating level. Whatever you like. You will not blow anything up.

It's got a mute switch. It's got a 'just turn it down while I cue up so I don't throw my woofer cones across the room but I still want the same volume I was listening at before I flipped the side' "dim" switch. And what goes with "dim" better than "sum" which would be the "mono" button... It has a fantastic hyper-regulated outboard power supply that plugs in on the huge-est connector you ever saw. And you can just hit the "standby" button to keep everybody off while you take a small holiday to Tahiti. A backlit Manley Steelhead illuminated badge reflects back to vinyl-days-of-yore while the millions of blue LEDs remind you that this is modern tube engineering design!

The variable outputs are controlled by the precision film dual NOBLE volume control. They are smooth action these days as the fashion went against the detented ones.

(No reviews yet) Write a Review 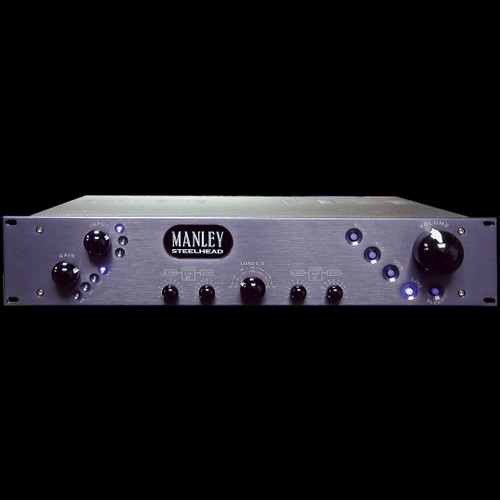