The Esoteric F-05 was designed as a core component of Esoteric’s new F Series of Integrated Amplifiers. Like the F-03A, its fully balanced preamplifier section was acquired from the Grandioso C1, and its high-powered amplifier modules were acquired directly from the Grandioso S1.

As first seen in Esoteric’s premier models, the F-05 employs a complete dual-monaural configuration through all stages of amplification, from preamplifier inputs to the final stages of the power amplifier. Highly recommended for those who value the exhilarating feel of music’s rich expression, the F-05 provides the power to dynamically open any sound stage, and deliver exceptional levels of performance when used in combination with any of Esoteric’s line of state-of-the art digital players.

Representing a new generation of integrated amplifiers, Esoteric’s new F Series has been thoroughly invested with proven results gained in the development of our flagship Grandioso line of separate amplifiers. With the goal of capturing all the inherent warmth and texture of music, not only were the outstanding expressive powers of the Grandioso line pursued, the utmost limits of audio performance were also concentrated into an integrated configuration that offers excellent usability combined with an attractiveness that more than compensates for the limitations of their size. Basic and Complete. With sights set on creating a unique presence in the category, the Esoteric F Series is born.

Fully Integrated
Aspiring to be superior examples of the integrated amplifier format.

Fundamental
Invested with the finest materials and expertise in pursuit of the essence of amplifier design, while seeking uncommon sophistication and substance in the most basic format.

Functional
Offering more versatile tone control capability than separates, while bringing out the full potential of the integrated amplifier by providing ample functionality and abundant expandability in its overall refinement.

A Fully Balanced Preamplifier
One result of the lavish attention given to the development of the F Series is the preamplifier’s fully balanced configuration, which derives from our highly esteemed C Series preamplifier models. Impervious to noise, it delivers pure and powerful signal amplification at ultra-low impedance.

Dual Monaural by Design
The one design feature of these amplifiers that most clearly reflects Grandioso thinking is their dual monaural configuration, which maintains complete left and right channel independence through all stages, from preamplifier to the power amplifier’s final stage. As Esoteric integrated amplifiers, the major investments made in circuit construction expertise and materials developed over the years yield excellent channel separation and a measure of sound quality that transcends the class.

Ultra-Low-Noise Logic Control
As a countermeasure against noise, all control lines have been electronically separated from the main body of the preamplifier with the use of isolator elements integrated into the front panel.

3-Band Tone Control (Treble/Middle/Bass)
Commitment to achieving all the quality associated with high-end components results in a balanced dual monaural configuration consisting of four circuits (L/R, –/+) for each band. This system enables users to adjust tone settings free of any concerns about sound quality deterioration. Shifting the variable band more than usual toward the high and low frequency ranges (14kHz/63Hz) permits fine adjustment of bass and treble without adversely affecting the original source signal. Fully electronic control also permits fine adjustment of up to ±12dB in 0.5dB steps. The middle band can also be utilized as a loudness preset when set to the minus side and used in conjunction with the Tone Bypass switch.

Large-Capacity Custom Power Transformer — The Nucleus of the Finest Power Amplifiers
The power supplies of the F Series feature large-core 940VA custom EI power transformers and 40,000μF block capacitors for each channel in a dual monaural configuration. Large-gauge cable is used in all connections to help minimize impedance. As in our separate power amplifiers, this outstanding power section achieves a theoretically linear power output ranging from 30W at an 8ohms load to 60W at 4ohms (F-05: 120W/8ohms, 240W/4ohms) for faithful reproduction of every musical dynamic.

Large Bipolar LAPT Transistors Deliver 34 Amperes of Instantaneous Peak Power
Featured in Grandioso models up to and including the M1, large bipolar LAPT* transistors deliver an outstanding continuous current capacity of 17A, and 34A of instantaneous peak power. Their superior high frequency characteristics also play a critical role in the accurate reproduction of the most delicate tones. * LAPT: Linear Amplified Power Transistor

3D Optimised Chassis Construction
The F-Series’ 3D Optimized Chassis features robust construction that gives each circuit block its own dedicated compartment. Interference between circuits is effectively minimized while achieving the shortest possible cable routing. Chassis exteriors are formed of thick aluminum panels manufactured without compromise following the same design philosophy imbued in Esoteric’s separate amplifiers. As a result, their heavy-duty construction tips the scales at a total weight of 32kg, exceptional among integrated models. The F-03A’s pinpoint feet* and the steel insulators supporting the F-05 at four points are just two examples of the rigorous countermeasures taken to minimize the effects of vibration. * Patent No. 4075477

Designed for System Upgrades
The preamplifier and power amplifier sections of the F Series boast the same degree of refinement as Esoteric’s separates, and can both be used as standalone devices, or even disabled if not in use. The PRE-out employs a powerful buffer amplifier, while XLR outputs achieve a highly effective fully balanced configuration. System upgrades can also be performed with no compromises in quality, and a card expansion slot facilitates the installation of an optional OP-DAC1 D/A Converter Board, which adds full compatibility with 11.2MHz DSD and 384kHz/32-bit PCM signal inputs. 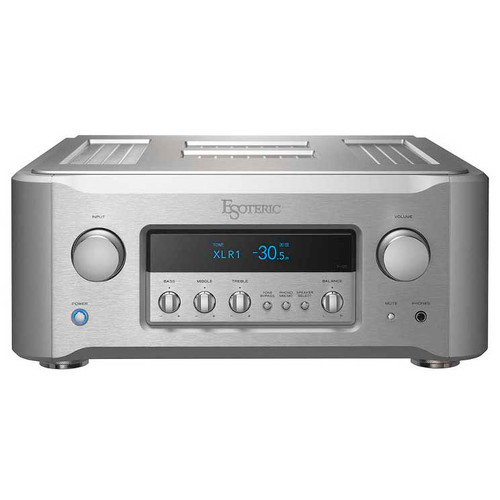