The lineage of high-end digital audio follows the evolutionary steps of ESOTERIC digital players. This began with the first generation P-1/D-1 model in 1987, which made the revolutionary step of including a VRDS mechanism, and was followed by models featuring the ultimate in engineering and craftsmanship, such as the P-70/D-70 in 2001 and the P-03/D-03 in 2005. In the year 2016 these models were succeeded by the superior P-02X/D02X. And now three decades after the birth of the ESOTERIC brand, we have the P-05X/D-05X. The P-05X/D-05X inherits the successful results of the P-02X/D-02X to give birth to a new milestone in high-end audio which is suitable for the start of the next three decades.

In the Footsteps of ESOTERIC's Most Advanced Grandioso Technology

Both the P-05X and D-05X have been newly equipped with ESOTERIC's state-of-the-art ES-LINK4, which provides high-accuracy digital transmission of both DSD and ultra-wideband 352.8kHz/48-bit PCM by way of its HDMI cable connections. A core feature of the Grandioso P1/D1 digital source system, and developed in line with ESOTERIC's ‘Pure D/A’ concept, ES-LINK4 performs the major portion of digital signal processing on the transmission side to significantly reduce the processing load on the D/A converter in pursuit of the ultimate in sound quality.

The D-05X utilises a 34-bit D/A processing algorithm to convert the PCM signal to analog. This 34-bit encoding provides an astounding level of digital resolution that is fully 1,024 times that of 24-bit encoding, and quadruple that of the original D-05 model. Taking advantage of the delicate tone realised by this high-bit data minimises calculation errors for outstanding expression of even the most subtle musical signals.

A BNC cable connects the D-05X to the P-05X to provide a master clock sync signal for synchronised playback with minimised jitter. ESOTERIC's proprietary Direct Master Clock Link* synchronises the two units while eliminating the need for Phase-Locked Loop (PLL), enabling clear and accurate stereo imaging and crisp sound quality. The system can be further upgraded with the addition of an optional high-accuracy external Master Clock Generator and supports a wide range of frequencies including master clocks (22MHz/10MHz) and word clocks (44.1kHz/88.2kHz/176.4kHz).

A DAC following in the footsteps of the Grandioso D1, with uncompromising audio quality

The D-05X uncompromisingly inherits the DAC design philosophy of the Grandioso D1 flagship device and updates all the circuit components from the original D-05 model to obtain sound quality that should be considered the standard for ultra-high end devices. It includes a large capacitance power supply with two large toroidal transformers at the core for independent left and right channels. The circuit size of the DAC has been doubled to have four differential circuits per channel. In terms of functionality, the D-05X features ES-LINK4 digital transmission, 34-bit D/A processing, the well-received ESOTERIC-HCLD line buffer from the Grandioso C1 preamp, and the unique ES-LINK Analog line transmission for high audio quality. It also supports playback at high resolutions such as DSD 22.5 MHz to obtain even more outstanding audio playback overall. 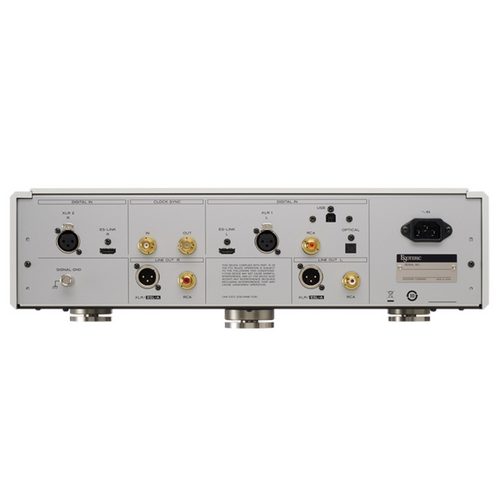