We have one Hugo 2 in black available at a discounted price - it's been opened, charged up and played once for a customer. Save $$ on an as-new unit!

Hugo 2 is a powerful DAC and headphone amp that builds on the ground-breaking original. Designed for both home and mobile use, Hugo 2 transforms headphones and audio systems’ sound quality with its cutting-edge proprietary DAC technology.

Hugo 2 can be used both at home and on-the-go, either with headphones or within a conventional audio system. Its line-level output and full-function remote control adds real flexibility in full-size and desktop systems.

The device offers four digital inputs (optical, coaxial and HD USB) plus extended-range Bluetooth, with high-resolution file playback up to 768kHz and up to DSD512 (Octa DSD), via its HD USB input. Analogue outputs include 2x RCA, plus 3.5mm and 6.35mm headphone outputs.

A four-function switch filter offers a useful degree of user-selectable frequency-shaping, bringing warm and soft or transparent and incisive presentations, giving additional flexibility and user control. For headphone-listening, Hugo 2 retains the popular digital crossfeed function of the original and offers three operation modes. The system duplicates the effect of listening to speakers and is based on advanced binaural audio research. 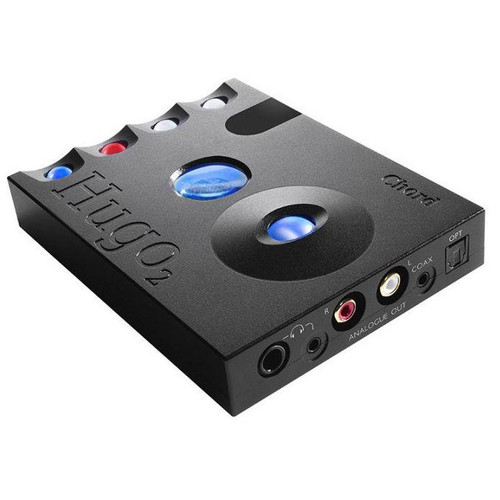